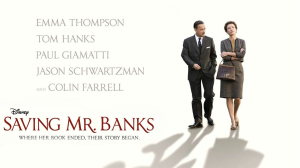 The story follows P.L. Travers (Emma Thompson) as she flies to Los Angeles to try and co-write a script for Mary Poppins that she can live with.  Walt Disney (Tom Hanks) has been trying to make this happen for twenty years, so he is trying his best to get the difficult woman to work with him and his crew.  While writing the script Travers flashes back to her childhood, and to the father she loved Travers Robert Goff (Colin Farrell).

Like most “based on a true story” movies, there are several differences between it and the real-life tale, but what they have presented is quite good.  It is a touching story about the influence a father can have on a child.  Even a father with some serious flaws can positively shape the lives of his kids.

Had you told me before I saw this movie, staring both Emma Thompson and Tom Hanks, the performance that would blow me away would be Colin Farrell, I wouldn’t have believed you, but it is true.  He is the standout in this film full of talented people.  His portrayal of P.L. Travers’ father is almost perfect.  It is sad and sweet, and he makes Goff someone you can root for.  Now both Emma Thompson and Tom Hanks are predictably good, great in fact as is the rest of the cast, but Farrell was incredible.

John Lee Hancock, who is known for his sports biography movies, deftly applies his skills to this story of a quarrelling writer and billionaire.  He somehow makes a film about acquiring legal creative rights both interesting and enjoyable.  True he had great actors to work with, but it was him that kept the whole movie in focus and on track.  It was perfectly edited, so that it did not feel too long or that anything was left out.

It was a good film, and one that will no doubt be in the hunt for some Oscars next year.  Of course a movie created by Disney Pictures would paint Disney as the hero of this film, but still it was fun to watch.  I also hope that after this movie Farrell starts getting some better roles because he is more than capable.