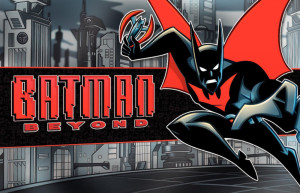 I noticed Batman Beyond on Netflix, and I have started watching it again.  The animation is a little rough, but I am impressed with how well the stories have held up.  For a cartoon that was just supposed to be cool so that it would appeal to thirteen year old boys in the 90’s, they did a great job.

Bruce Wayne (Kevin Conroy) is too old to continue to be Batman, but with the help of the young Terry McGinnis (Will Friedle) in a high tech Batsuit they are able to keep the Gotham of the future safe.

Kevin Conroy is voice of Batman.  It is a shame that he and Mark Hamill (the cartoon Joker) have stepped down.  I hope they get to make The Killing Joke for their final carton movie.  They are some of the best voice actors of their generation.  Will Friedle is good too, but Conroy is simply great.

Watching the series now makes me wish that they would have gone ahead with the movie they were planning before Batman Begins.  Don’t get me wrong, I am happy with the Nolan Batman movies, but a Batman Beyond movie would have been awesome.  I hope Warner Brothers dusts that script off and we get to see it.

If you are looking for a good thirty minute show to watch, Batman Begins is one of my favorites.

2 Replies to “Re-Watching Batman Beyond!”