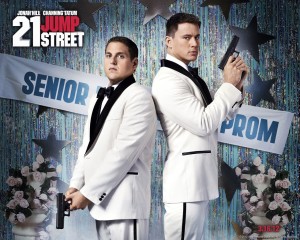 21 Jump Street is a movie based of a television show from 1987.  A show I might add that when Mom wasn’t around I enjoyed watching as a kid.  They decided to play it for laughs instead of the drama that it was initially, and it mostly worked.

The movie starts as we watch Morton Schmidt (Jonah Hill) and Greg Jenko (Channing Tatum) in high school, Jonah is a geek and a looser, and Channing is a cool jerk jock, but they graduate and get to know each other in Police Academy, and become partners.  They screw up their first bust and they get sent to a restarted under cover project called Jump Street as punishment.  Because in the police force being an undercover detective is worse then being a bike cop.  At Jump Street they are sent back to high school to bust a new designer drug ring.  Hilarity ensues.

This movie mostly works because of the chemistry between Tatum and Hill.  They seem to be having a great time making this movie and hanging out together and it brings you in to it.  Hill plays his normal unsecure overweight guy, and Tatum plays his normal good looking dumb guy throughout this movie but for a buddy cop comedy it works, and watching thirty year olds navigate an ever changing high school scene is quite funny.  They also throw in some over the top action just because, and it is always appreciated.

If you are in for watching some raunchy high school humor, it earns it R rating, and writers blissfully destroying a “classic” show from the ’80s this movie is worth a watch.