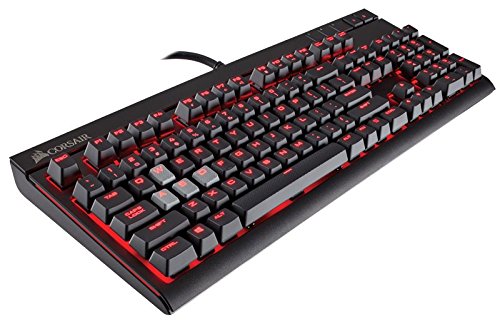 I have wanted a mechanical keyboard for quite some time, but I could never justify the price for one with real Cherry MX switches.  Not to mention my Microsoft Natural Elite has held up great for its more than fifteen year tour of duty, and if Microsoft would have made a mechanical variant of that keyboard I would have bought it in an instant.  Thankfully Corsair ran a deal on its refurbished STRAFE keyboards.  Now I can never go back to a rubber dome keyboard.

I didn’t think it would make that much of a difference, but it is night and day.  Every keyboard press is registered properly and with 100% accuracy.  No more, “did I push that or didn’t I?”, no more squishy feeling.  It immediately made a difference in my response times in games too.  I was still terrible, but at least now I was terrible with my character doing exactly what I was telling him to do when I told him to do it.

It was keyboard bliss until my ‘O’ and ‘Y’ keys started sticking.  I have never had a problem with refurbished hardware before.  I was devastated.  I was worried that my refurbished kit was buyer beware, but after a very quick phone call my new keyboard was being overnighted to me.  A+ for customer service.