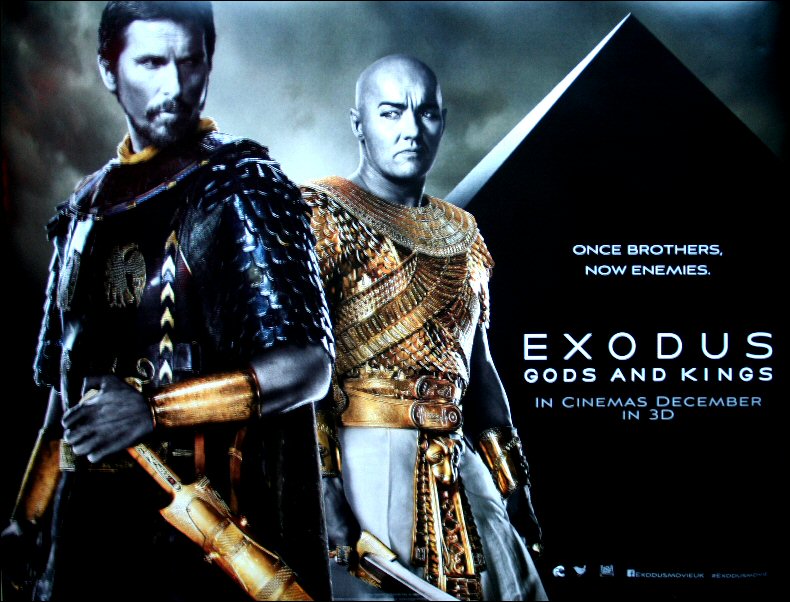 I am going to be upfront, I am reviewing Exodus: Gods and Kings from the point of view of a Christian that believes in the Bible’s version of the Exodus, but I am pretty sure that if I was a skeptic, I still wouldn’t have liked or understood it.  Leaving me to wonder who this movie was for.  People that kind of believe in the events of Exodus?  Maybe ones that want a Moses that isn’t sure of what God is up to?  I don’t know, and I don’t think this movie does either.

If you have ever heard the Bible story of Moses (Christian Bale) and the plagues of Egypt, you will kind of know what is going on in this movie.  I say kind of because they change up the events quite a bit, and mostly for pointless reasons.  Well, I should say that I didn’t see the point.  I would love to hear Ridley Scott’s reasoning.

Here is the deal, if they were going to change up the story so that the plagues or the Exodus were less miraculous, I could understand it.  I wouldn’t like it, but I could understand the story the writing team was trying to tell.  With Exodus: Gods and Kings, they kind of do that, but then made it so that it would still be impossible without God’s help and intervention.  If you are going to make a movie about miracles, you should just tell the Biblical version.  If not, leave God out of it.

The odd story changes aside, had the movie been interesting or gripping, I probably would have let it all slide for the sake of entertainment.  Sadly Exodus: Gods and Kings is a pretty boring flick.  They go through all the plagues pretty matter-of-fact-ly (even if incorrectly), and they never build any tension.  Plus, they turned Moses and God in to jerks, so they are hard to empathize with.  Meanwhile, the Pharaoh is a spoiled brat, so it is not like they were trying to turn the story on its head either.  They just made everyone unlikable.

I am not a huge social justice crusader, but it does stick out that none of the main characters of Gods and Kings are Jewish or Egyptian.  It feels like in the twenty-teens we could find some actors of the proper ethnicity to fill at least some of these roles.  I like Christian Bale and Joel Edgerton (Pharaoh) quite a bit, but they are odd choices for the leads in this film.

Had Exodus: Gods and Kings been good, I probably wouldn’t have been so hard on it for its crazy story and curious casting choices, but it wasn’t, so all I could think about while watching this movie is why Moses was a self-centered jerk and what all theses British people were doing in Egypt.  A big screen Exodus could have been a lot of fun, but someone forgot to tell Ridley Scott that.

2 Replies to “I Am Confused By Exodus: Gods And Kings!”