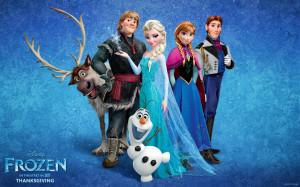 Frozen was by far the best American animated film to come out in theaters last year, and it was one of the most successful movies period, so far earning north of a billion dollars worldwide.  I reviewed the movie when I saw it theaters last year, and I loved it.  My thoughts on the film haven’t changed much, so this mostly going to be a review of the disk itself, and anything else I think needs to be said.

Like pretty much all computer animated films, this movie looks wonderful on an HD TV.  All the colors just pop, and even if you do not have a 3D set, the images seem to come out of the screen.  You feel like you can run and jump in the snow with Anna, Elsa, and the rest of the gang.

One thing I did notice on my second viewing, is that while the movie is better then anything Pixar has done in a couple of years story wise, Disney Studios still has a ways to catch up with their digital film counterparts as far the animation goes.  The characters can still look a bit stiff, and separated from their environment.  It is almost not fair for them to have to be compared to Pixar all the time, but the bar has been set, and Disney Animation falls just a tad short.

There are not a ton of extras on this disk.  Their are couple of deleted scenes, but they are roughly drawn, and not fully animated.  They do give a glimpse of what Elsa would be like if she was evil, and a little more info on the sisters’ relationship.  There is a “making of” featurette, and some music videos as well.

This is a great movie, and it looks fantastic on an HD TV.  You should have no worries about bringing this movie home.  If you have kids this is probably a must buy.  I hope Disney Animation Studios continues to make great movies like Frozen.