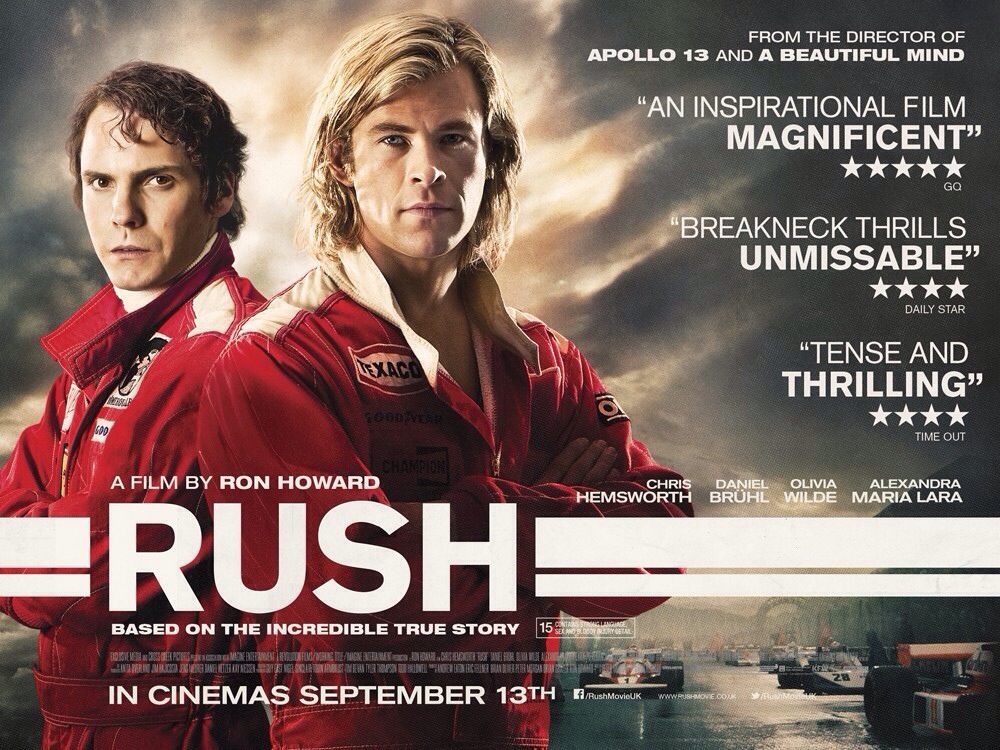 Ron Howard is the king of making movies based on true stories.  A Beautiful Mind and Apollo 13 are classics, so I was looking forward to seeing Rush in the fall of 2013, but it got lost in the shuffle.  I am glad my wife pointed out to me that it was available as part of the Cinemax free weekend because while this movie is not a classic it is still very good.

The story follows two Formula One drivers:  The free spirited and loose living James Hunt (Chris Hemsworth), and the buttoned up and stiff Niki Lauda (Daniel Brühl) from their early race days to their storied battle for the 1976 Formula One Championship.  They hate each other at first, but over time they come to respect one another.  Plus they have a mutual understanding of what it takes to do their very dangerous job.

What I love about this movie is that it doesn’t try to make this story more than it is.  It is about two men that race.  Neither of them are the good guy or the bad guy, and it doesn’t even try and mold them in to likeable people.  They are both quite honestly kind of jerks, but what they did in 1976 was so amazing that to change who they are and were would be a disservice to their story.  They were simply dominant.

Chris Hemsworth finally got to show that he was more than Thor, sure he still looks like Thor in this movie, but he gets to show a much wider range of emotion.  Daniel Brühl turns in a great performance as well.  He makes the arrogant jerk that is Nikki Lauda watchable and human, and from what I have read that is quite the feat.

Ron Howard has an amazing ability to not let his movie making style overwhelm the movies he directs.  Each of his films has a unique feel, and that is the same with Rush.  If I hadn’t been told that it was a Ron Howard film it would have been hard to discern.  He lets this tale progress organically, and he doesn’t force anything to happen.  He has earned his place among the top directors working today.

Rush is a very good movie, and for two men to dominate a sport the way Hunt and Lauda did was incredible.  Still the movie would have needed something a little extra to push it in to classic territory.  I think the two men that this movie is about hold it back because they themselves are not deep enough.  They are race car drivers and not a lot more.  Ron Howard did not disappoint with Rush, and I am just sad that I waited a year to watch it.