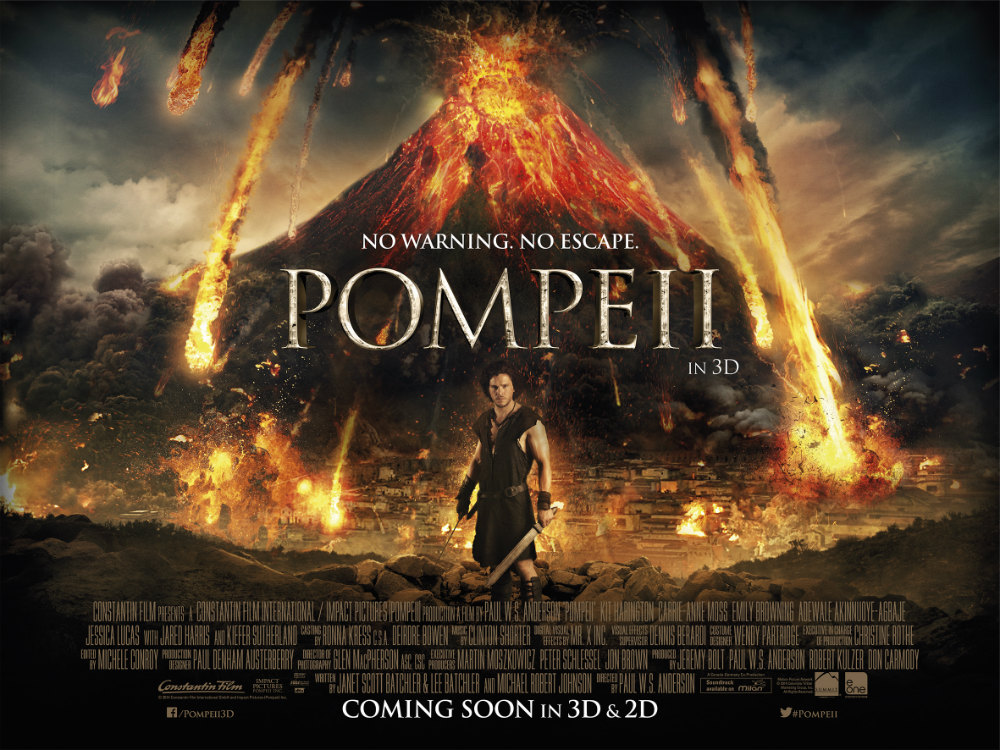 Oh man, I have been dreading this day.  Today is the day that I review the 2014 film Pompeii distributed by TriStar Pictures.  What is sad about this movie is that it could have been a mindless action/disaster movie and been okay, but instead it is just all around bad.  The acting is bad, the special effects are bad, and you guessed it the script is bad.  That is the trifecta of bad.  I should expect no less (more?) of Paul W. S. Anderson.  He has a true gift for making terrible movies.

The story is about a young Celt named Milo (Kit Harington) who watches his family get butchered by the Romans and then is forced to become a gladiator.  He becomes a premier fighter and is moved to Pompeii where he falls for the Governor’s daughter (Emily Browning).  She is also being wooed (poorly) by Senator Quintas Attius Corvus (Kiefer Sutherland) who just happens to be the guy responsible for killing Milo’s family.  None of this really matters because they are all going to get killed by a Volcano.

Oh man this movie.  Really it is a Gladiator ripoff with a little Titanic thrown in for good measure.  Now I understand that there has to be some sort of story so we care about the people running from the fiery ash at the end of this movie.  Sadly, you don’t because they are all very stupid and one note.  You have to watch them make dumb move after dumb move until the end.  I wish at that point they would stop being dumb, but no, they continue to hold their grudges and act out their stupid storylines while the city is falling down around them.  Luckily for them the Volcano will stop erupting for them to have their epic(?) face-offs.

Normally with a script this terrible I give the cast a pass.  I mean there is only so much you can do with something like this, but these people all find ways to add to the garbage pile.  Harrington always looks like a sad puppy.  Browning looks confused, but best (worst) of all is Sutherland.  He tries his best to have a British accent (never mind that he should be trying to have an Italian one), but it is awful, but he does it with such gusto that it is almost funny.  Almost.  No one comes out looking good in this film.

The special effects artists deserve a Razzie for their work in this film.  I have never seen so many obvious green-screen shots in my life.  It was like watching a 90s made for TV Sci-Fi movie.  I was blown away with how bad everything looked.  If this was on the Discovery Channel or something maybe it would be passible, but for a big budget film it is inexcusable.

I have spent way too much time writing about this film, but all you need to know is that it is terrible.  It isn’t even so bad it is good, and I love those types of films, no this movie fails at even that.  Don’t watch Pompeii.  It is an hour and a half of your life that you will never get back.  Everyone who was part of this movie should feel bad about themselves.