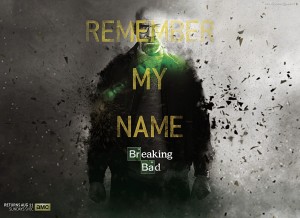 TV has lost its greatest show.  Breaking Bad ended perfectly last night, and I am sad to see it go.  I am going to keep this wrap up spoiler free, but Vince Gilligan and crew did the impossible and ended the show better than anyone could have believed.  If you don’t know what Breaking Bad is than you need to stop reading this get on Netflix and start watching it now.  Trust me, it is worth it.

My greatest fear heading in to this final episode was the that Vince was going to fulfill his promise about turning Mr. Chips in to Scarface literally, and just have the show end in a hail of bullets, but as Vince has done all along he did something a little different. He gave us the perfect ending that no one predicted, but looking back it was the way it had to end.

I have to congratulate AMC for sticking with this show even when it wasn’t a ratings winner.  Most networks (I am looking at you Fox) would have moved it to Fridays and than canceled it, but they stuck with it, and had what will be remembered as one of the best, if not best show of all time.  I will miss it, and that is why I am such a sad panda today.  If Breaking Bad doesn’t sweep the Emmy’s next year it will be a crime.

4 Replies to “Breaking Bad Is Over: I Am A Very Sad Panda!”