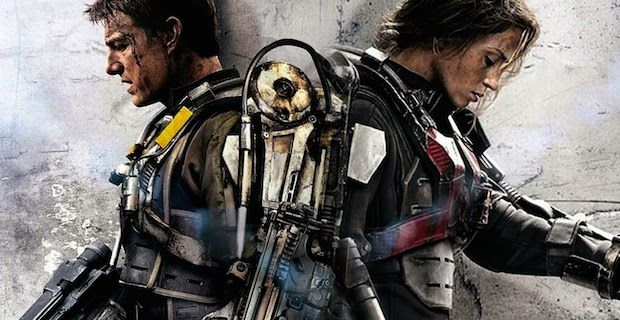 …and I live to tell about it.

Based of the manga “All You Need is Kill” by Hiroshi Sakurazaka this Tom Cruise vehicle is an interesting mash of Groundhogs Day and Saving Private Ryan. Now we’ve had this conversation before, so I know exactly what you need to hear to go see this movie; which you should by the way.

First is the wonderful reincarnation of General George Patton by Bill “Game Over Man!” Paxton. Paxton is at once charming and insane as he delivers lines like, “Its alright to be scared. Remember, there is no courage without fear.” Inspiring.

The next person of note is Emily Blunt as Rita. Blunt plays the role with gusto, diving into the world and helping the audience along. What I love most about her character is that she is a soldier who is driven and fierce; she is no fainting damsel waiting for Tom Cruise’s character to come fetch her, she’s actually a more formidable warrior than our film’s hero. Blunt is perfect in this role, she is beautiful but cold and if there was anyone I’d want to kill me over and over again, it’d be her.

Now for the elephant in the room – Tom Cruise. Tom Cruise dies well. In fact its a lot of fun to see he die in this movie. Mr. Cruise actually brings a lot to the film beyond just his name for the top billing. My friend summed it up nicely when he said as we were walking out of the theater, “Its like he remembered how to act.” It seems recently either Tom’s been on cruise control or jumping on couches over the top. In this film he starts off as a slimy PR guy and ends as a hero – and you believe the whole journey. As the deaths pile up and victory seems impossible we see the weight of it in Tom’s perfect green eyes and in his bearing. What I also love is that when you see him look at or interact with Emily Blunt’s character there’s a look of care and friendship and not lust. He likes her, sure, but he’s gotten to know her and come to respect her. I guess I’m old fashioned like that.

The film feels fairly intimate since you spend the majority of the time with Cruise and Blunt and the pair make it worth your time. The premise is fun and interesting, in a mixture that is just right without bogging the film down or giving the characters too much power so there is still tension. For CG monsters I actually liked the Mimics and I’m a guy who gets CGI fatigue pretty quickly. They did a good job giving them weight so they don’t pull me out of the film.

The one criticism I would have is the ending. It sort of breaks the rules of the story world to give us a happy ending. I’m all for happy endings, but I felt like this film was leading to the first ending before the big reveal where our heroes died like heroes and that’s good enough.

Still you should see this movies because it is the kind of science fiction that actually engages your whole brain. You’ll engaged with the characters, you’ll have actual plot points to keep track off, you’ll laugh, you’ll jump, and you’ll leave satisfied. The alternative is Transformers 4 from which you’ll no doubt leave the theater like some sort of jonesing drug addict, avoiding eye contact and drooling slightly from the mouth.

Convince you to see Edge of Tomorrow? Hmm… I’ll have to try again. Was it the perfect green eyes bit? It felt a little forced. I’ll do better next time.

2 Replies to “The Paladin goes to the Edge of Tomorrow”