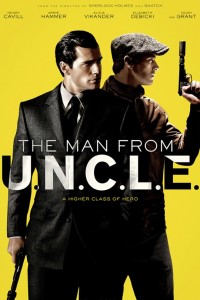 There is something about period spy movies that are just fun… or at least they can be. It a fine line of course. You can go too campy; trying to play on the sensibilities of the period and end up creating a very unreal world or you can also go too dramatic and suck all the life out of history. The Man from U.N.C.L.E. by Guy Ritchie walks the line perfectly – reveling in the colors, styles, and sensibilities of the 60’s. At the same time it is aware of the reality and tension of the time; thus keeping its feet on the ground. For reference The Man from U.N.C.L.E. (TMfU) hews closer to the newer James Bond films than the Connery or especially the Rodger Moore films – but it has fun while it does it.

TMfU follows the unlikely paring of the CIA’s Napoleon Solo, played by Henry Cavill, and the KGB’s Illya Kuryakin, played by Armie Hammer as they try to stop a group of Fascists from arming a shadow Nazi regime with a Nuclear Weapon. Dragged into the middle is Gaby Teller (Alicia Vikander), a German mechanic who’s father might be helping to build the bomb.

The cast is a lot of fun, Henry Cavill really sells the charming and competent Solo, Hammer exudes barely controlled strength and malice, and Vikander’s Gaby is strong, brave, and intelligent. The “bromance” between Solo and Kuryakin is a lot of fun to see develop, as is the actual romance of the story.

The thing I loved about TMfU was the witty banter and the way it was shot. Ritchie certainly has his own style that infuses a lot of life and energy into his films and for TMfU he adds little touches you’d recognize from films from the 60’s. Layered cuts, long zooms during chases, and just a touch of technicolor give the movie a nostalgic feel and energy that sets it apart from say a Bourne movie or James Bond.

The Man from U.N.C.L.E. is a fun, witty, and energetic and I highly recommend you give it a try.