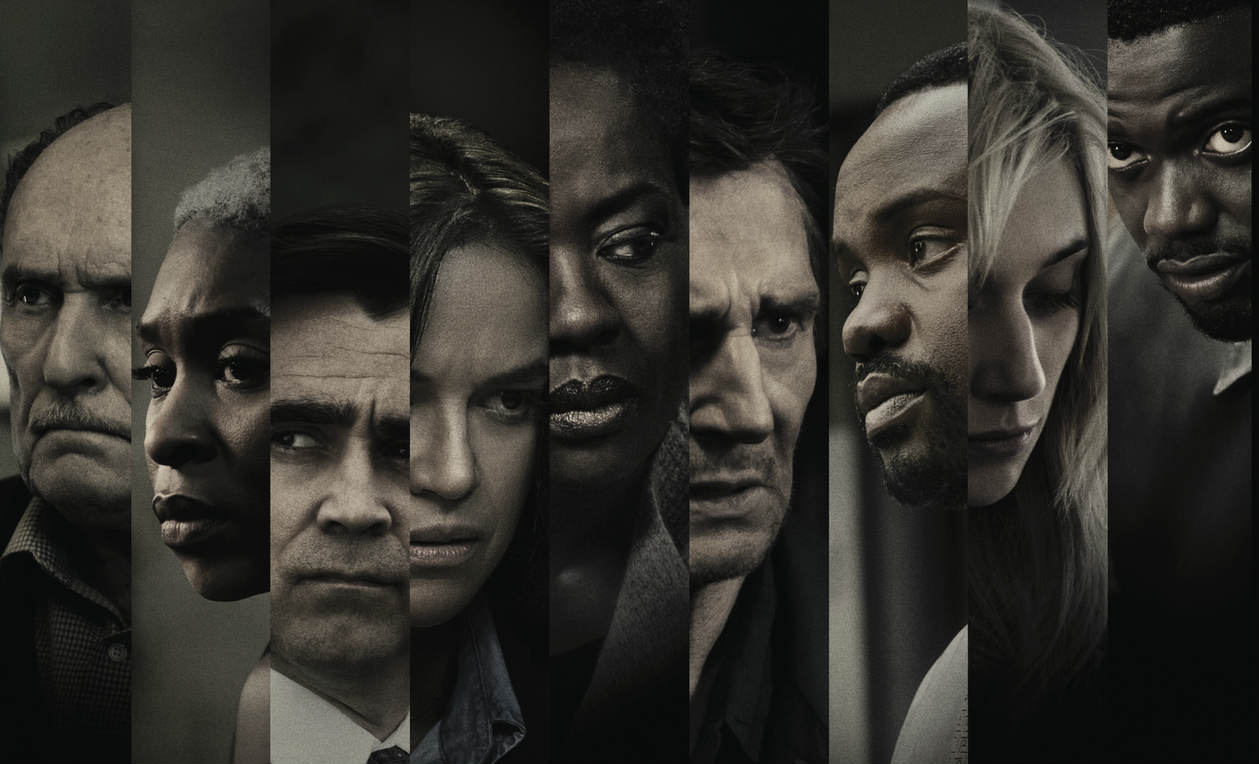 Widows is Steve McQueen’s first movie since his Oscar winning film 12 Years a Slave.  It is based on the 80’s British TV show of the same name, but I am guessing the movie is quite a bit different than the show.  Yes, they are both about widows of thieves pulling a job to pay off their late husbands’ debts, but the 2018 move also pulls in commentary about the current state of Chicago, and what it is like to be African American in America, so in other words it is not just a gritty Oceans 8.

In the opening minutes of Widows, Veronica (Viola Davis) Rawlings’ husband, Harry (Liam Neeson), and his crew are gunned down by Chicago Police officers, and it turns out the man they stole the money from is a crime boss running for alderman, Jamal Manning (Brian Tyree Henry), and he needs his money to run his campaign.  He gives Veronica a month to pay back the money.  With nowhere to turn for help she enlists the other widows of Harry’s crew to pull off a job to pay Jamal and secure their future.

What every good heist movie must to do is make the main crew sympathetic, and Widows does that very well.  The husbands were bad men, the crime boss is terrible, and the man Jamal is running against Jack Mulligan played by Colin Farrell might represent the worst of Chicago.  He comes from a long line of political wheelers and dealers that have allowed and helped bring Chicago to where it is today.  Some armed robbery considering all that seems minor.

If you are going to try adding politics and racial tensions to a heist movie, you need a good script, and Gillian Flynn of Gone Girl fame did a great job, and cast they got deliver the lines is phenomenal.  Even people that were on the screen for like five minutes is ‘A’ list talent.  Apparently once you win an Oscar everyone wants to work with you.

Not everything is perfect though.  Because of all the added commentary Widows is a bit slower than a standard heist flick, so if you were expecting action and tense scouting, you may be disappointed.  An Oceans or an Italian Job this is not.

I really liked Widows, and I thought McQueen and the bucket loads of talent that brought this movie to life did a great job.  It just might not be the movie that the trailers lead you to believe that it was.  Go in looking for something a little slower and more thoughtful, and I am sure you will be happy with what you see.

As I have said before, the hardest reviews to write are the ones for movies that are just okay.  There is nothing to point out that is poorly done, and there is nothing to laud.  Illumination’s The Grinch is such a film.  It is bright, the characters are cute, and the digital sets are amazing, but it is still the same story stretched over eighty-six minutes.  Which feels about forty minutes too long.

If you have read the book or watched the Chuck Jones original short, you know the story.  The titular Grinch, this time played by Benedict Cumberbatch, hates Christmas because his heart is two sizes too small, so he attempts to steal Christmas from the Christmas loving Whos down in Whoville.  Illumination attempts to add some context, so that we can at least understand why the Grinch doesn’t like Christmas, he doesn’t like it, no not at all.

I will say that at least it isn’t as horrifying as the Jim Carry/Ron Howard movie from 2000, but at least that movie is actively bad, so I can feel some emotion about it.  This 2018 Grinch attempts to delete itself from your memory as soon as you watch it.  It is kind of like paying $15 for sugar free cotton candy.  You probably will not hate it, but you should have spent your money on something else.

The biggest compliment that I can give Illumination’s The Grinch is that my four year old daughter loved it, and I think that is the target audience for this movie, so I guess they hit that mark, but we have been so spoiled lately with animation that works for adults and children, it is hard not to be disappointed with this outing.  If you need to take your family to a movie, and they can’t wait for Ralph to break the Internet, The Grinch is a family movie that exists and is fine, and even better, it is short.  Did you know you can get the Chuck Jones’ How the Grinch Stole Christmas on Blu-Ray for less than the price of a movie ticket?

I love stop motion, and Laika is one of only two studios left doing it, so I would pretty much watch whatever they put out.  However, when you also take in to account that they created Coraline, ParaNorman, and Kubo and the Two Strings, I am double in!  Missing Link doesn’t look as epic as those movies, but it still looks like fun. 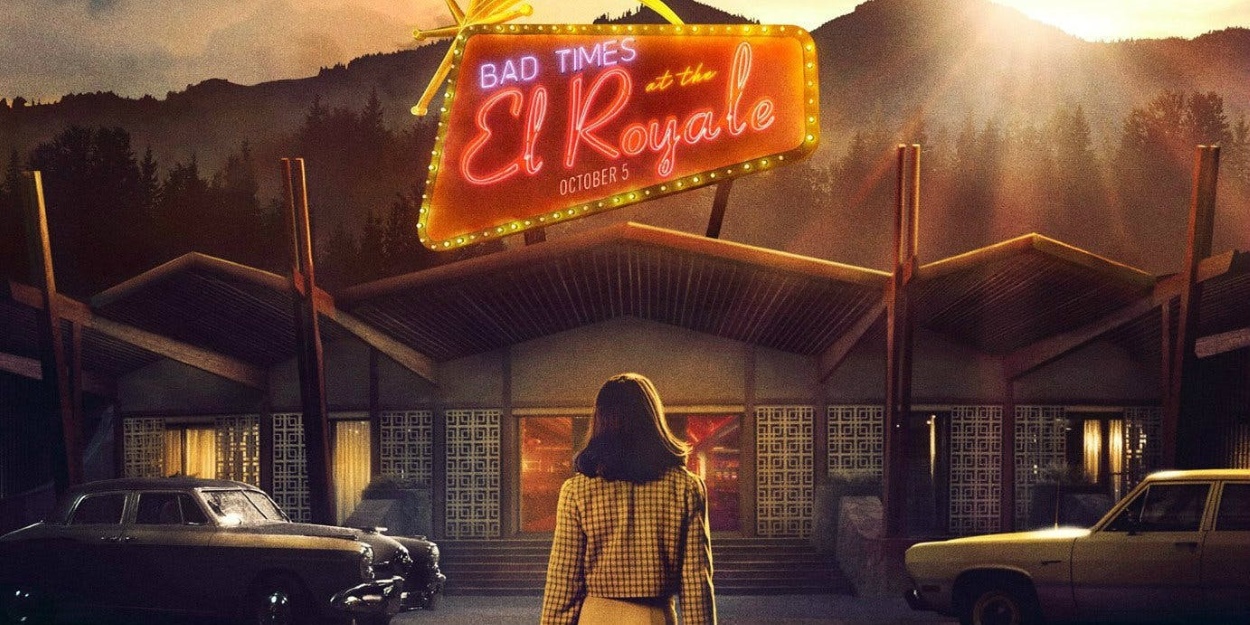 Bad Times at the El Royale is the type of movie that actors love, and that audiences are mostly indifferent to.  The roles are meaty and have lots of great dialog, but because of that the movie can feel slow and plodding.  However, if you enjoy watching actors ply their trade, you will find a lot to like at the El Royale.

Bad Times works best if you know nothing about it.  The trailers, as sparse as they are, give too much away, but the title is discriptive enough.  A small group of people check in to a run down motel called the El Royale, for mostly doubious reasons, and they do not enjoy their stay.

There is a lot of talking and well earned mistrust in Bad Times at the El Royale, and actors enjoying talking and mistrusting each other.  Dakota Johnson in perticular seems to be happy with something interesting to do, but if you had just finished making three Fifty Shades movies, you would probably be happy with a real acting gig as well.

It is not just Dakota Johnson having a good time, Jeff Bridges, Jon Hamm, Cailee Spaeny, Lewis Pullman and Chris Hemsworth are all seemingly having the times of their lives with this script.  Hemsworth in particular you could tell was very exctied to be playing a villain instead of a straight laced norse god.  The real standout however was newcomer to the silver screen Cynthia Erivo.  While she has made a name for herself on Broadway, she is now a movie star in the making, and she more than holds her own against all this top teir talent.

The only disapointment I had with this film was that the directing, while fine, was just there to serve the script.  The trailers made it seem like it was ozzing with style, but in fact it has more of a dingy film noir look to it, which is fine, but even then, a movie with this much talking could have used a little directoral razzamatazz.

I enjoyed Bad Times at the El Royale quite a bit, but I am not sure you have to run out to theaters to see it.  It will be just as good at home on the streaming service of your choice.  Also, if you need a little more than good acting in your movies, Bad Times are probably what you will have at the El Royale.  However, for film buffs like me who like quirky, talky character flicks, you will probably want to check in to the El Royale. 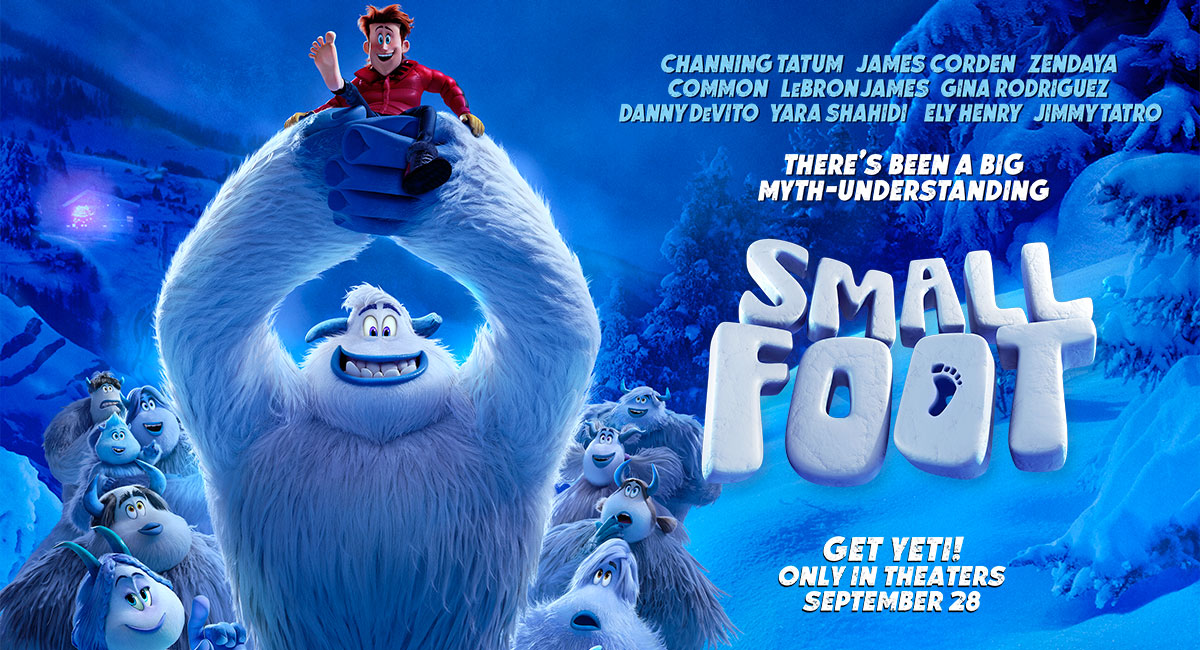 Smallfoot is only the fifth movie from the Warner Animation Group (WAG), which is known for the LEGO movies, but it has dipped its toe in to more traditional movies with Storks.  Which was oddly a Sony Animated film financed and distributed by Warner Brothers.  This strange relationship must have worked well because Smallfoot was created much the same way, with Sony doing the animating, and Warner doing everything else.  As with Storks, the end result is a fine family movie that will keep kids entertained and adults mostly engaged.

Smallfoot is about a group of yetis that live high in the mountains.  They have a complex society with a bunch of strange rules written on stones.  Those rules will get challenged when Migo (Channing Tatum) finds a smallfoot (James Corden), AKA a human, which the stones say doesn’t exist.

The plot is straightforward: This smallfoot challenges the status quo, and the elder wants none of that.  Also the message is basic:  Choose knowledge over ignorance, and embrace the outside world over isolation, but straightforward and basic are good for a family movie.  The kids will be able to keep up with what is going on.

The movie has a good collection of actors who can all sing and read lines well, but there aren’t any real standouts.  Just a bunch of professionals doing their jobs, and that is more than enough for this movie.

Smallfoot is not a classic, and it is not going to be a family favorite, but if it is on Netflix or your kids are dying to go to the theater and you haven’t seen it yet, you could do worse.  It will at least let you change it up so that your kids aren’t watching the same thing over and over.  It is nice to see Warner Brothers getting back in to animation.  They have been out of the game for far too long.  However, while Storks and Smallfoot were good, it would be nice to see them do something more ambitious with their next non-LEGO flick.